How A Disinterested Girl Fills Out The 2016 Bracket

About this time last year, I wrote a column entitled “How A Disinterested Girl Fills Out A Bracket” with lots of valuable advice about how to make your March Madness bracket picks when you just don’t give a crap about college basketball. Among my priceless recommendations: make decisions based on player hotness, school spirit, cuteness of school mascots, attractiveness of school colors or personal relationships with random people you know from each school.

And now I’m back again with more semi-precious advice for those of you that want to fill out a bracket but actually care more about who won The Bachelor than you do about the Final Four. If by some miracle you use these tips and finish in the money, slide into my DMs and I’ll give you my address to mail a portion of the winnings. I mean, that’s only fair, right?

Go With the Party Schools. General logic would say that if they know how to party, they know how to play right? If that’s the case, here are your choices, per TFM’s “Unquestionable Ranking Of The 10 Best Party Schools In The Nation”: Iowa State, Colorado, West Virginia, Wisconsin, Texas Tech, University of Texas, and USC. Party hard, play hard.

Pick The “Who The Hell Are They?” Schools. If I had to put money on it, I’d bet that I am the only person you know that went to Gonzaga. Why? Because it’s a tiny little school in god-forsaken Spokane, Washington. I literally had to bribe my family with a trip to Vegas on the way home to come to my graduation. But for some reason, at least one of those rando schools always seems to make it, so go with the unknowns: Southern (not Southern **Somewhere**, just Southern), Austin Peay, FGCU, Fairleigh Dickinson, Hampton and Weber State.

And Ignore The “What The Hell Is A (Insert Mascot Name Here)” Ones. Listen, if your school mascot isn’t an actual thing, how is your basketball team? See ya, Iona Gaels, Stony Brook Seawolves, Chattanooga Mocs, Wichita State Shockers, Maryland Terrapins, and Utah Utes.

Reverse Vacation Picks. Here’s what I figure: if your school is located in somewhere that I’d actually like to vacation, odds are your b-ball team’s focus isn’t 100% on the game, given the plethora of other things to do off-the-court. So that means the Vanderbilt Commodores (Nashville), Hawaii Rainbow Warriors (Mānoa, HI), Arizona Wildcats (Tuscon, AZ),California Golden Bears (Berkeley, CA) and Miami Hurricanes (Miami, FL) are out. Using the same logic, places I wouldn’t go if you paid me are in, so good luck Holy Cross Crusaders (Worcester, MA), Green Bay Phoenix (Green Bay, WI), Buffalo Bulls (Buffalo, NY), Tulsa Golden Hurricane (Tulsa, OK) and South Dakota State Jackrabbits (Brookings, SD).

Automatic First-Round Wins All The Puppy Mascots. There is nothing more basic than puppies, so see you in round 2 to the Bulldogs of UNC Asheville, Fresno State, Yale, Gonzaga and Butler. And big ups to the UConn Huskies for having a canine name that’s not Bulldog.

Pick Two. Not McDonald’s style, you idiot. (Although I could totes go for an Egg McMuffin right now). I mean, two brackets, which is what I do every year. The two-bracket scenario gives you twice the opportunities to look like you know what the hell you are doing.

For my first bracket, I go with auto-pick, letting the experts make my choices. I then make two or three changes, so my use of auto-pick isn’t too obvious.

For my second bracket, I make my decisions based less “scientific” methods. I obviously pick my own school(s) to go the Final Four, as well as my boss’s alma mater – because the old “happy wife, happy life” motto also applies to a happy boss, there’s just no good rhyme for it. Schools where people I hate went are out; schools with dogs as mascots are in. The rest of my choices are made totally randomly. For instance, I have a super comfy University of Virginia sweatshirt someone gave me, so this year, they are going deep. And every year, my second bracket inevitably does better than my first.

In case you’re interested to see my picks for this year, here you go: 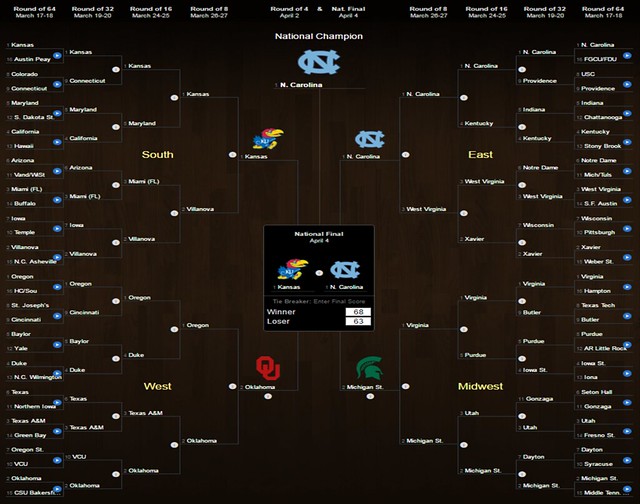 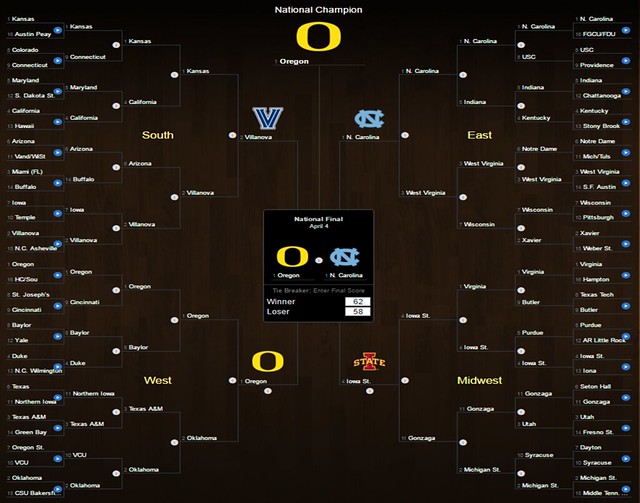 Jenna used to be known as 2NOTBrokeGirls, but then one of the girls actually went broke, so she's struck out on her own. Jenna spends her free time saving the world, one sorority girl at a time (usually while wearing yoga pants), questioning why she decided to get a doctorate, documenting her love of all things cheese related, and hosting the new PGP podcast Don't Take It From Us. You can ask her anything you want about football, using your boobs to get what you want, and pizza at @JennaLCrowley on Twitter or via email at [email protected]